SAR is deep in our roots. While our current logo reflects our connection to cutting edge technology in the FR world, our original logo was all about rescue. The St. Bernard acted as our mascot of sorts for the first 10 years we were in business. When we asked co-founder Randy Benham why he chose the iconic Swiss rescue dog for the company’s first logo, his answer was characteristically straightforward. “It was just something fun,” Benham said. “The St. Bernard with a whiskey bottle on it represented rescue. In the beginning we started making products for and marketing to rescue people around the country.” 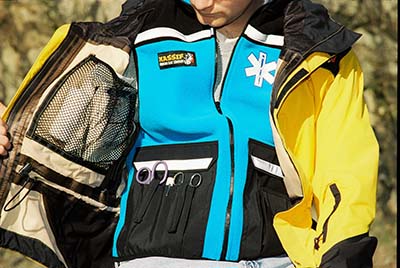 While Benham, a respected and accomplished search and rescue professional with years of service, has a calm demeanor and tendency to downplay most of the smart decisions he made in the past—we think the choice of the St. Bernard was brilliant. It offers a perfect metaphor for the beginning of the company itself. St. Bernards have been directly responsible for saving over 2,000 lives in their namesake St. Bernard Pass in the Swiss Alps. Their broad chests that could work through deep snow, keen sense of smell, and uncanny ability to find people buried in avalanches made them the perfect breed for mountain rescue.

The 50 mile stretch of the Alps that culminates in St. Bernard Pass (8,100 ft) spans a route between Italy and Switzerland that has proved exceptionally harsh and avalanche prone to travelers for nearly a thousand years. The route was regularly travelled by pilgrims headed to Rome and a monk named Bernard De Menthon built a shelter up there sometime around 1050 to help keep the travelers alive in the brutal and dangerous conditions. In the mid 1600s monks who ran the emergency shelter began breeding and using dogs to accompany people and keep them safe along the route. The dogs ended up proving such capable rescuers that the monks would send them out in groups of two or three—one or two would dig out avalanche survivors or guide people stranded in a whiteout while the other alerted the monks to come help—on their own to affect rescues throughout the harrowing stretch.

The numbers are a little tough to nail down on exactly how many lives were saved in the over 200 years St. Bernards patrolled their namesake pass, but it is believed to be over 2,000. Although the monks didn’t keep stats on individual breeds of individual dogs, the most famous St. Bernard on that pass, BARRY, is said to have saved 40 lives. The epic nature of his rescues is so storied that he has a monument in Paris’s Cimetière des Chiens that reads, “BARRY THE ST. BERNARD. HE SAVED THE LIVES OF 40 PEOPLE. HE WAS KILLED BY THE 41st.”

Massif co-founder Benham, and two of his first salespeople—Darin Jernigan and David Bywater—were all Jenny Lake Climbing Rangers in Grand Teton National Park for years. While current technology like the use of helicopters in rescues, cell phones (which work in a surprising amount of Grand Teton), and GPS location devices have made mountain rescue a completely different world than it was in the 1600 and 1700s—the Jenny Lake Climbing Rangers did share something with the St. Bernards. Both dealt with a great many inexperienced mountain travellers lost and in desperate need of help in brutally cold environments. Both also stepped up to the task of risking themselves to save those travellers. Co-founder Jeff Roberts also believed the connection between the breed and SAR professionals was a solid one. “Massif was founded as a maker of gear for search and rescue teams. The St. Bernard was originally bred for alpine rescue so we thought it was a fitting image for the company — as St. Bernards are big, strong, brave, and friendly — just like their human SAR counterparts,” Roberts said.